ANT VR Review: Virtual Reality has revolutionized the world of Multimedia. Although virtual reality promises you a walk on the moon, for some just the sensation of viewing their favorite movie on the big screen is a big selling point. That is the reason a lot of companies like Google, Samsung and now Lenovo is developing such VR gadgets for their customers.

So, welcome the new Theatermax technology included into some of the new Lenovo smartphones which are allowing you to experience big-screen view on your device. Yes! You can get the great view of the big screen right at your home. Lenovo has launched its new ANT VR device. Let us look more into how does Lenovo allow its customers the chance to experience VR at home.

Theatermax is new software available in the Lenovo smartphone which allows you to experience VR at the comfort of your home. In order to switch to this mode, hold on to the power button, and you will be displayed with numerous options such as Airplane mode, etc. Choose the VR mode which will switch your device to Theatermax mode. Tap this icon will split your screen into two halves and then you can rotate your screen into landscape mode. Then insert the smartphone into the Ant VR device and the two screens will get merged into one.

Google’s cardboard and Samsung’s Gear VR is limited only to a few applications that have been pre-designed, but the Lenovo’s ANT VR brings any of your application to the large screen. Be it a movie being played in Video Player or viewing your Facebook timeline onto a larger screen. ANT VR will give you the cinematic experience in almost every situation.

Design of this new VR gadget

The device looks pretty big if compared to the Google cardboard; however, that won’t possess a problem as this device can easily be folded and made smaller. However, it doesn’t turn into a small pocket size but is sufficient to fold it in and keep in your bag. 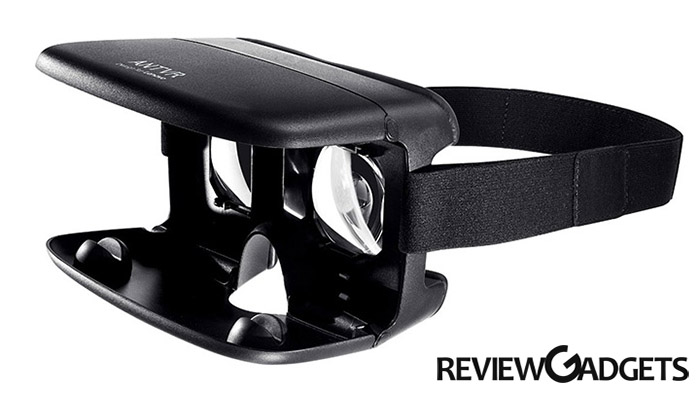 The design of the device is pretty much similar to Google cardboard with a clasp on front, lenses at the back and a nose rest. However, this headset uses a hinge design for you to be able to fold this device and keep it in your bag. The hinged design provides greater security to your phone so that it can be kept firmly in its place, but this feature also makes attaching the phone difficult. On the back are the two rubber straps present which tends to firmly place this design over your head, and you get an entirely hands-free experience.

The back area where you put in your head is sufficiently padded for giving you extreme comfort, and unlike the VR device of Google, this device has square lenses. This shape of lenses according to the company provided a 100-degree view and is also comfortable to wear with glasses on.

Performance: The device along with the straps as well as padded interior is excellent for watching 360-degree videos and playing some very exciting games. The gadget after being fitted with the phone might result in a bit pressure on nose and cheeks, but you get used to it in a short while. All of this adds to an excellent hands-free service. However, fitting your device into the gadget is a pretty tiresome job, and you need to get some practice before you can correctly fit in the device. Once the phone gets accurately set into the headset, there is a space provided on the side that helps you access the touchscreen easily, without having to remove the gear. But this space also provides a drawback which is- in case you are using this device in bright light then some light would continuously pop in through the gaps. This decreases the sense of immersion and hence has an effect on the video. 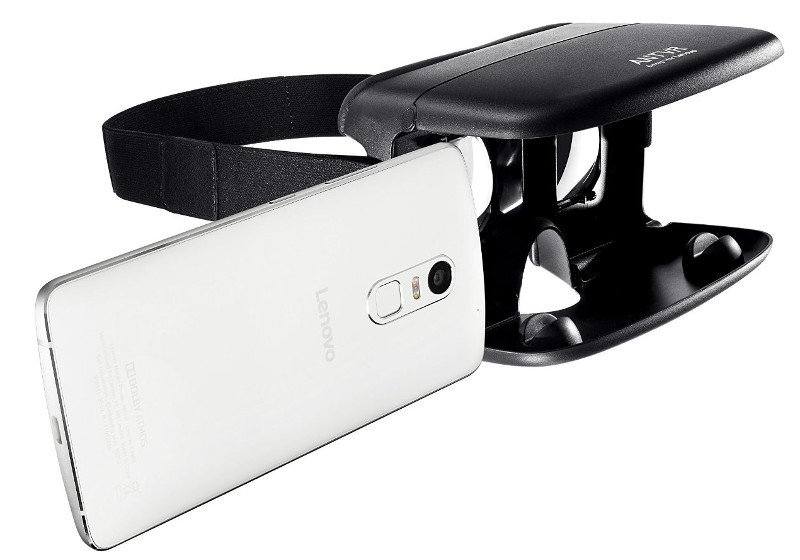 Aside from this, the device is easy to be used, all thanks to the Theatermax software. The device allows you to browse quickly through the Android applications and hence you can get almost everything being displayed on the big screen.

One thing that is to be kept in mind is that while using this gadget, you won’t feel any VR, which means that you won’t be able to see or move around. You will just be able to see the huge main screen and nothing else in contrast to Google’s cardboard and Samsung’s Gear VR where you actually get the feeling of being transported to the cinema hall.

Verdict: This device is a bit oversized gadget but is very easy to use and has been built very well. If you buy it with one of the Lenovo’s phone than this device costs you Rs. 500 as compared to Rs. 1299 if you buy it separately. The gadget works well and is perfect for people just looking for an alternative to watching videos on a big screen or play games on a big screen. However, people looking for the actual VR functionality will be left disappointed as this gadget does not offer that.  This product is definitely worth consideration as there aren’t many devices available that can compete with this product at this price.

The phone has been seen to work very well with Lenovo K4 Note and Lenovo Vibe X3; it supports most of the Cardboard applications as well.